1. Some say “I hate network marketing because only the guy at the top makes money.”  But isn’t every business like that? Imagine showing up with no skills at all and expecting to make more than the company owner. ( The guy at the top who invested his time and money to get the ball rolling.)
2. Some say “only the people above you make money.”  I just spent 8 years making more than my sponsor. And her sponsor. and his sponsor, and his sponsor. (Crazy huh?)

3. Some say network marketing is a scam / pyramid scheme because so many fail to make money. Well I like to compare new network marketers with new golf players / new basketball players. How many new golf players get as good as Tiger Woods in 6 weeks? Most new network marketers do not have realistic expectations. They don’t build up their tolerance to get over the first hurdle. They do not invest in the training they need to get the job done. Many make the mistake of inviting their most down and out friends first who reject the opportunity … Then they become discouraged and quit.  Let’s do an honest comparison please.

4. Some think recruiting for money is illegal. The army has paid recruiters. So do many large corporations. If your teacher made a percentage of the money you made for the rest of your life … do you think they would have tried harder to teach you more?

5. Some say: “I don’t want a business where my success depends on the performance of other people.”   They most likely still have an employee mindset. They are not willing to go out on a limb. (Where the fruit is.)

When I’m asked what do you say when they say “this looks like a pyramid scheme”.  I say “Next”.  It’s not worth the debate.  They are programmed to continue the life they have been living.

Regulators want to see the main focus to be on the product or service.  NOT on recruiting or selling starter packages. Like any industry, you’ll find many scammers in network marketing.  What to look out for? “No selling or recruiting required” .. Just invest.  BE WEARY OF WHERE THE MONEY IS COMING FROM. ( It’s HIGHLY unlikely  to be coming from “traders” working in the background.)  If it’s just from new members/investors, The Network marketing “company”  will probably crash and burn.

No. they are not legal in many countries / states. “You should be able to give your money to who ever you want.” True to a point. However the gifter’s assume they will get more money back than they put in. If the gifting program gets big enough to get the authorities attention, they will go after the promoters to pay back what they earned. (Clawbacks) By searching the internet you will find gifting program Cease & Desist Orders from: Oklahoma, Virginia, Missouri, Wisconsin, Sacramento, New Mexico and countries around the world. 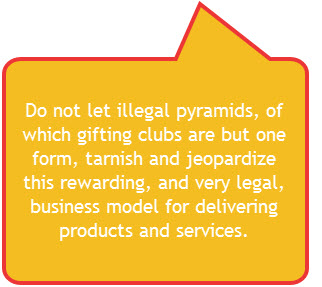 No. Not in most countries. HYIPS are sort of like gifting programs except there is a fake investment company involved and promoters are looking for investors instead of giftors.  They promise zero risk and an unsustainable return. If everyone was promised a 200% payout .. where is the money going to come from for all the people on the bottom row?  By promoting HYIPs you are helping criminals take advantage of your trusting friends.  Never heard of a shut down HYIP? Search “Genius Fund”  The Genius Fund was a HYIP that got shut down by regulators and investors lost $400 million+.